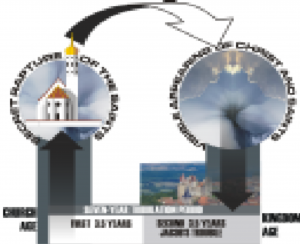 The Second Coming of Christ is in two phases: the first phase is the ‘catching-away’ of saints of God who are abiding in Christ when the Lord Himself shall descend from heaven to the air and dead and living saints will be transformed and lifted to Him in a twinkling of an eye.  In this first phase, the Lord Jesus Christ will come for His saints dead and alive in the atmospheric region. The second phase is when the Lord Jesus Christ will descend on the earth with His saints and holy angels. He will land at the Mount of Olives in Israel and begin a series of activities leading to the reestablishment of a literal kingdom of God on earth.

The significance of Christ’s second coming stems from the fact that His assignment on earth is split into two comings spanning three dispensational epochs with three finishing points. Christ has carried out the first phase of His assignment successfully. Without the second phase the plan of redemption for what God lost on earth would be meaningless. Therefore, Jesus must return to earth during the tenure of the generation that witnessed the rebirth of Israel on May 14, 1948 – the Fig Tree generation. About two thousand years separate the completion of First Coming activities and the Second Advent that covers a period of one thousand years.

Knowledge of end-time doctrine, times and seasons and how to prepare for the second coming of Christ as a living or sleeping saint is important to benefit from God’s plan for His children. As it is written: “For I know the thoughts that I think toward you, says the LORD, thoughts of peace and not of evil, to give you a future and a hope” (NKJV).