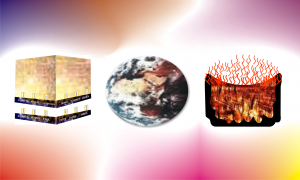 Every human being has eternal existence, but not everyone has eternal life. Everybody has three component parts: outward personality, inward personality and a controlling spirit. Your body is dust; your controlling Hypostatic Chip or demon must return to base but the real you comprising spirit and soul has three eternal destinations with a glorified body or body of dust. Mankind’s eternal destinations are New Jerusalem, New Earth or the Lake of Fire. Where you will spend eternity depends on the decisions you make or fail to make in this life.

The earth we live in now is not exactly the same as the original earth that God created in the beginning. The original earth has undergone seven dispensational changes. Whatever sin touches must be destroyed. Satan introduced sin on earth; as a result, the earth lost the capacity for external existence. Present earth will be destroyed by fire and a new one created to last forever.  God will create a new earth simultaneous with the battle of Gog and Magog.  The topography of the New Earth will resemble what it was like before the rebellion of Lucifer.

Hell is a term jail whereas Gehenna is God’s final refuge dump. Every creation animate and inanimate alike that cannot stand before God eternally will be dumped into Gehenna where fire will burn unquenchably in the similitude of contemporary city incinerator. When the present heavens and earth are burnt up, the resulting sulphuric debris will form a lake-like surface in Gehenna. Hence it is called lake of fire. It will be built as a place of punishment for the rebels of the Angelic conflict.  The size is likely to be enough to accommodate Satan, fallen angels and the pre-Adamites that rebelled with him. None of them is there now. Satan appealed against his sentence to the lake of fire. God gave him time to prove his case, meanwhile using him and his cohorts to perfect the sons of glory.